If you’ve recently broken up, probably your ex is sending you random texts asking you about your health and what you are up to. They might be asking of your whereabouts from your mutual circles and are trying to bump into your randomly.

Is your ex interested in finding out how you’re doing? Are they seeking reassurance that they made the right decision when they ended things? Or are they just curious about what’s going on in your life? Understanding why your ex might be checking up on you is an important first step to figuring out what to do next.

So, let’s find out the reasons why your ex is keeping a tab on you.

10 Reasons Your Ex Is Checking Up On You

A person’s behaviour can provide clues about their current thoughts and feelings. While there is no way to know exactly what your ex is thinking, understanding the possible motivations behind their actions can help you get a better idea of where they might be at emotionally.

Here are 10 reasons why your ex may be checking up on you.

1. They Are Guilty Of What They Did

Your ex-girlfriend or boyfriend may still think about what they did during the relationship. During this time, you were talking about trying to work it out but your feelings have changed since then. This is when they realize that they need to win you over again before someone else does. 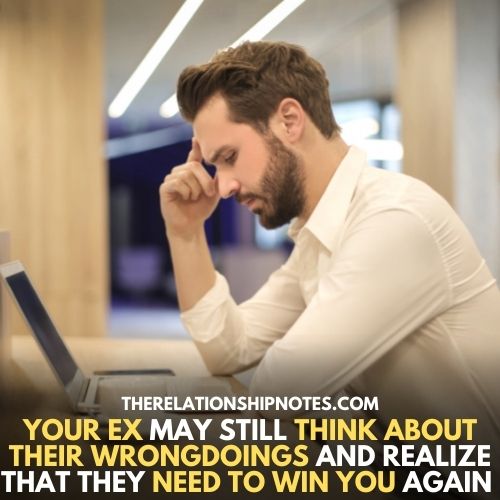 It’s also possible that their guilt is making them wonder if there might be a chance for things to go back to the way they were before the break up happened.

2. Its Because Of Their Lack Of Trust In You

Your ex might be checking up on you simply because they still believe you to be theirs and do not want you getting in a new relationship. Or maybe, they want to see if you are too hasty and move on with someone else too soon.

They may also want to find out your views on them so they may know what you’d be saying about them to others. Such a mindset stems only from your exe’s lack of trust on you and lead them to check up on you even after you are not together.

3. They Want To Get Back Together

While it might seem like you and your ex may never be able to get back together again, they may keep checking up on you because they want to get back. This is their way of making sure that they can find the right moment to come back into your life and ask for another chance. No matter how much time has passed by, if there was true love between you then nothing will stop them from coming back into your life as quickly as they left it.

4. They Need To Know What You Are Up To

When two people break up, they usually keep track of what the other one is doing is saying privately on social media. 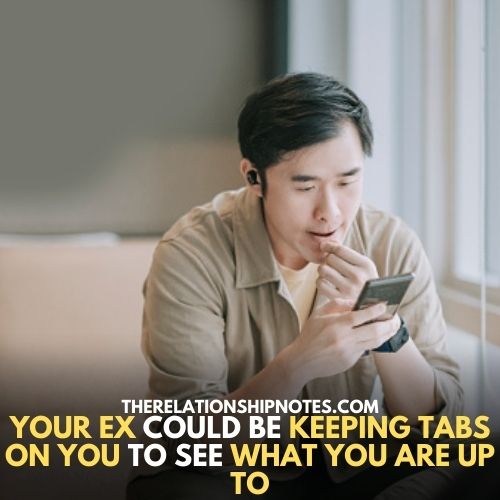 Your ex could be keeping tabs on you for this reason because their friends might have said something about where you are going after work or who you spend time with after work. There’s nothing wrong with them checking up on you, just be upfront about it.

5. They Want To Start Things Up Again

There are some cases where people have broken up, gotten back together and are now on their second break up. When they go through this cycle over and over again, they can’t help but wonder if there is something wrong with how things are going or the timing is off. This could lead them checking on your whereabouts so that they can figure out why things didn’t work out in the past when they were trying to get back together again.

6. They Still Care For You Deep Down

Even though you were in a relationship and then broke up, there may still be feelings of love for each other deep down inside. When people break up with someone because they don’t think it can work out, then chances are good that at least one person thinks about them deep down inside.

This could mean that they talk about what happened during the breakup and wonder if there was anything else they could have done to reconcile the problem.

7. They Want To Make Things Clear So That You Don’t Waste Your Time

When two people break up, there is always the chance that they will try to stay in contact with one another to see what could happen. When their ex boyfriend or girlfriend doesn’t want them to come back, this is when they may start telling everyone in their life about what happened.

This can lead to rumors and miscommunication between friends when they are trying to figure out what happened. Eventually, your ex may try contacting you again or talking things over with their friends who thought that you were seeing someone else during the relationship.

When people are moving after a broken relationship, it’s common for their exes to get jealous of other people in their new life.

This can lead to them asking questions about what you do on a daily basis and who you spend time with after work or school. If they don’t like what they hear, then jealousy could start playing a role and lead to more complications in the relationship.

9. They Are Trying To Seek Closure

After a breakup, it’s common to seek closure from your ex and that’s done by checking up on them. They want to know how you’re doing and what life looks like without them in the picture. Are you dating someone new? Do you enjoying being single? Are you seeing anyone else? If your ex is checking up on you, then they might just want to see if they’ve made the right decision to end things.

10. They Are Not Sure If They Can Get Over You

If two people break up, it’s common for one person to try and win the other person back by changing their behavior or making them promises. When this doesn’t work out, then they may realize that they can’t get over you no matter what they do.

This can lead to them checking on your whereabouts so that they can see what you have been up to during the past few weeks or months. If you are following a no contact, this is surely a damaging thing.

So, read on to know how to deal with all this

My Ex Is Checking Up On Me And Its Annoying: What Should I Do?

Now that you know more about the reasons why your ex boyfriend or girlfriend might check up on you, it’s important to find out what you can do in this situation. Staying patient and remaining calm during the entire process is very important if you want to stop them from contacting you again.

If you want to talk back, it is up to you. But, if you don’t want them checking up on you and entering your life again, here is what you can do.

The best thing you can do if your ex boyfriend or girlfriend is checking up on you without your permission is to avoid contact at all costs. This means not calling them back, ignoring their text messages and deleting their number from your phone.

If checking up on you isn’t the only thing they are doing, then you may have to start setting limits with them. A private contact management system can help you ensure that you don’t have to deal with their texts, calls and emails on a daily basis. This will also make sure that they stop checking up on you as soon as possible.

3. Block Them On All Social Media Websites

If your ex boyfriend or girlfriend is checking up on you through social media websites, then you have to start blocking them immediately. This will stop them from trying to look at your profile and gain information about what you’re currently doing.

4. Do Not Respond To Their Messages

If they know that checking up on you won’t change anything, then this can help them stop trying to contact you via text messages, email or on social media websites. If they know that there is no point in contacting you, then they will eventually try finding someone else to spend their time with.

5. Tell Them How You Feel About Their Behavior

If your ex boyfriend or girlfriend is checking up on you but hasn’t made any attempts to rekindle things, it’s time you tell them how you feel about their behavior. Tell them that if they want a relationship with you, then they need to learn how to respect the boundaries and not ask questions every single day.

6. Speak With A Love Coach

Speaking with a love coach can help you improve your communication and deal with your ex in a more mature way. Talking to an expert like this can teach you how to go about the entire breakup process and limit their access to you without crossing any ethical boundaries.

If they are constantly trying to contact you against your will, then it is possible that they are violating your basic civil rights. In this case, you can consider taking legal action against them and asking a judge to limit their access to you.

Just remember that something like this should only take place if your ex boyfriend or girlfriend hasn’t respected the boundaries that have been set between the two of you.

As you can see, if your ex boyfriend or girlfriend is checking up on you without your permission, there are ways to stop this behavior. They will probably stop trying to contact you within a few weeks if they know that the only thing they receive in return is silence. So, stay patient and use these strategies to protect yourself while moving on with your life.